So far in 2015, this year has been the slowest for tornadoes in the U.S. in over a decade, and would be the calmest in recorded history if it weren’t for a few severe weather outbreaks in Dixie Alley during January 1-4 right at the beginning of the year. Since that outbreak, there have only been a few tornadoes reported nationwide given the ridge the west and trough to the east that has dominated the climate pattern the second half of winter. Usually there are 36 tornadoes during February and 80 during March based on 1991-2010 averages and we’ve only seen 2… What does this mean for the rest of tornado season??? 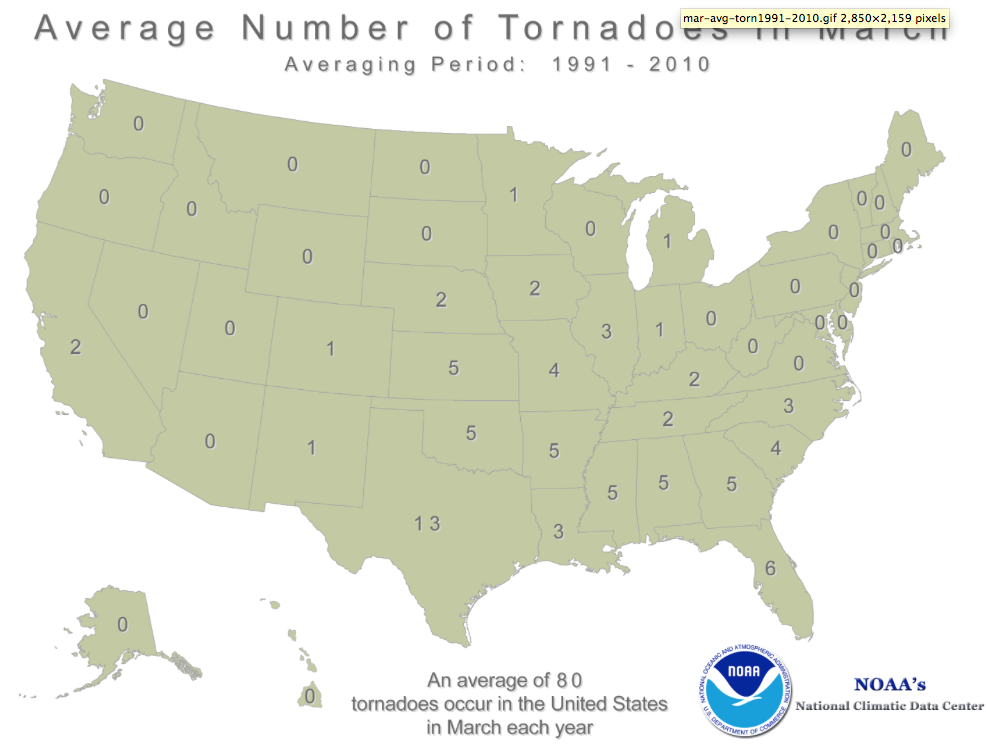 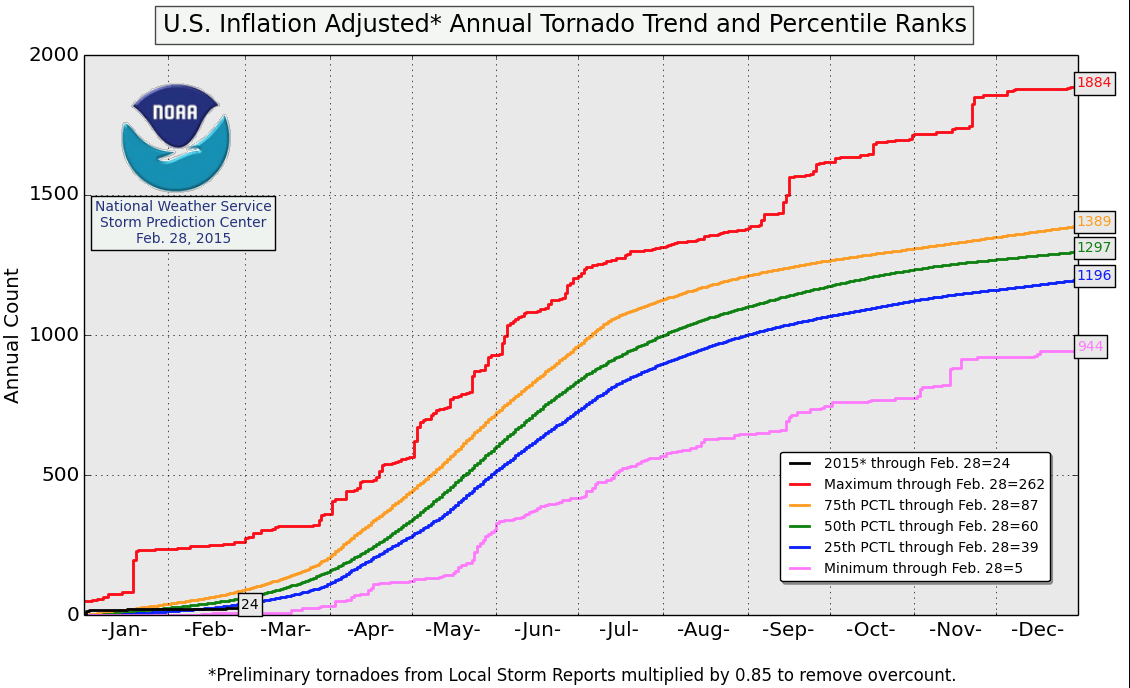 While this limited analysis may show that 2015 likely will be a below normal year, check out the plot below that includes 2011. That year was very close to the 25th percentile as well by the end of February and March, but ramped up BIG-TIME with the most active April for tornadoes in U.S. history, including the infamous April 15 and 27, 2011 outbreaks. However, 2011 was a much different climate regime with cooler water basin-wide in the Pacific. With the El Nino conditions in the Tropical Pac, though, it may be enough “juice” to result in a more near-normal tornado season by end. We’ll see… 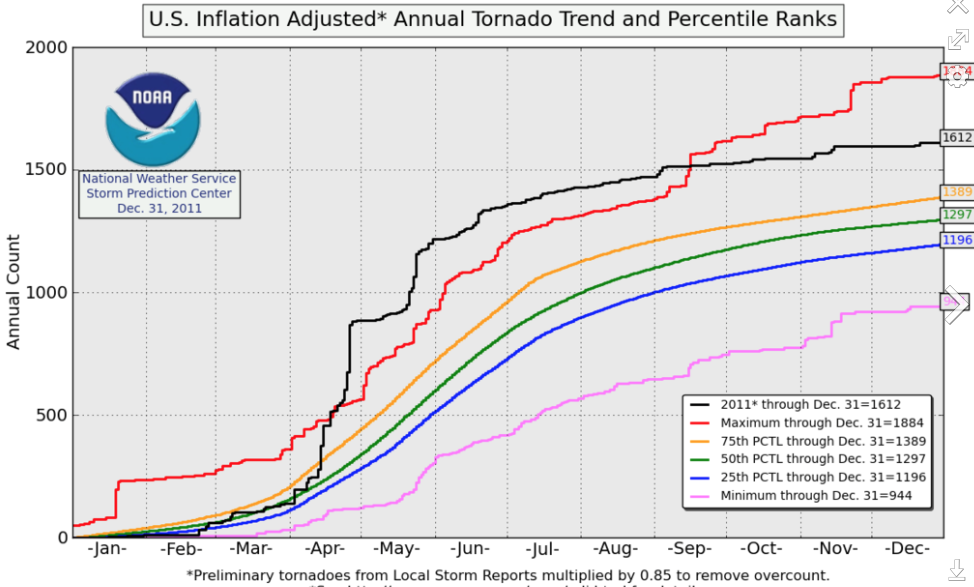 17362b5b134eb69e8b4f6c8a9a86e20a3a9bdba94ac.png974×587
The state that receives the greatest number of tornadoes on average during March is Texas, by far, with 13, followed by OK, KS and the Dixie Alley States with 5 tornadoes (AR, MS, AL, GA, FL). Interestingly, California is one of the more active states during March with 2 tornadoes confirmed on average during 1991-2010. The Carolina Piedmont region is also an active location during late winter/early spring with 4 and 3 tornadoes on average, respectively for SC and NC. 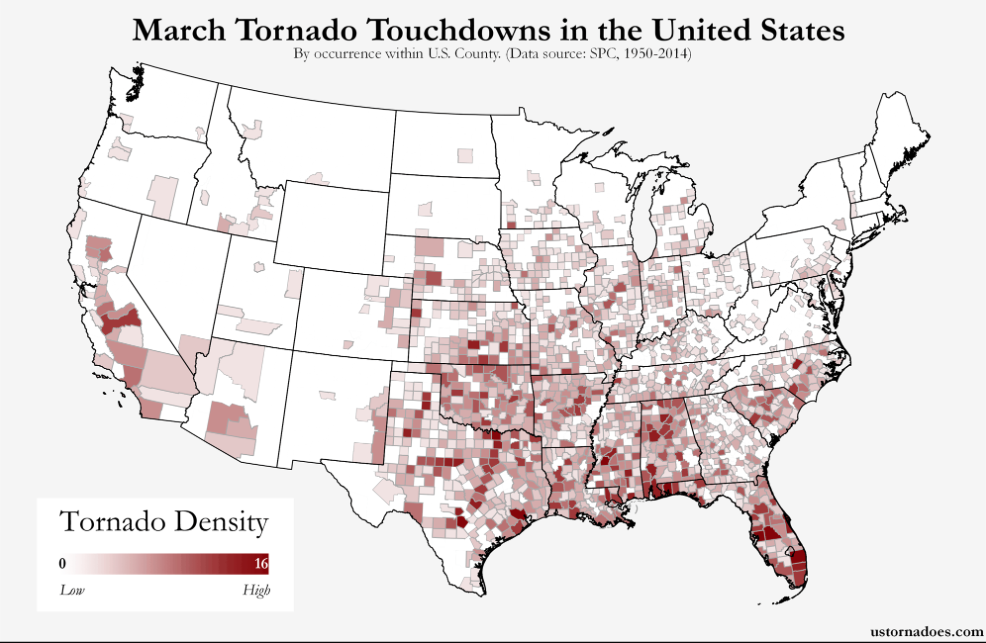 Here are the averages by month for tornadoes in the U.S. for the year: 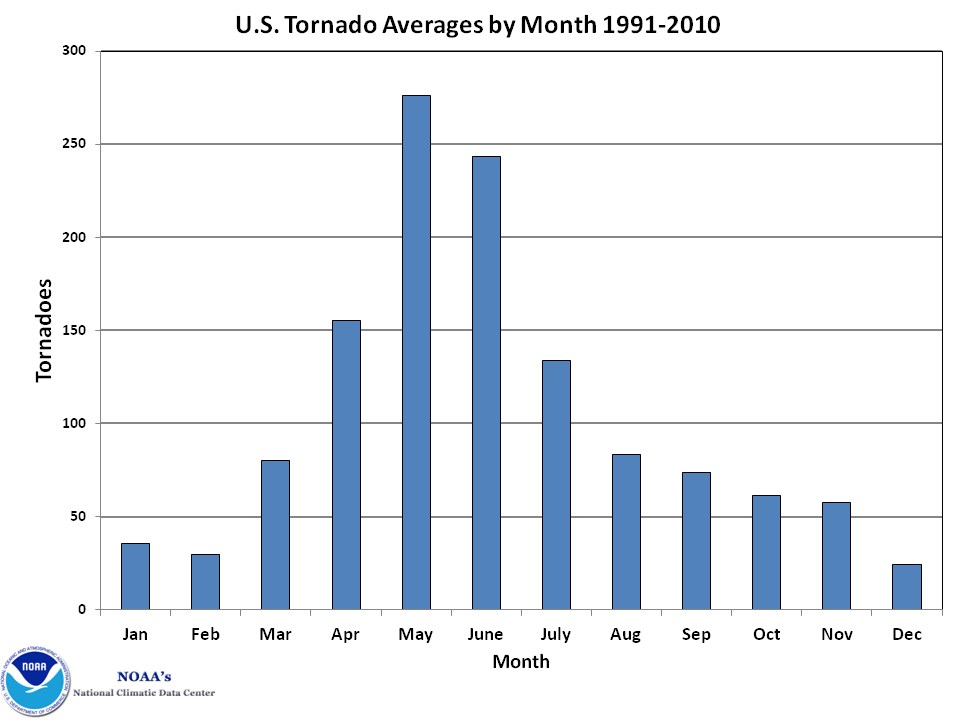 Is climate change leading to lower tornado counts in the U.S. with this ridge-trough pattern more common across North America??? 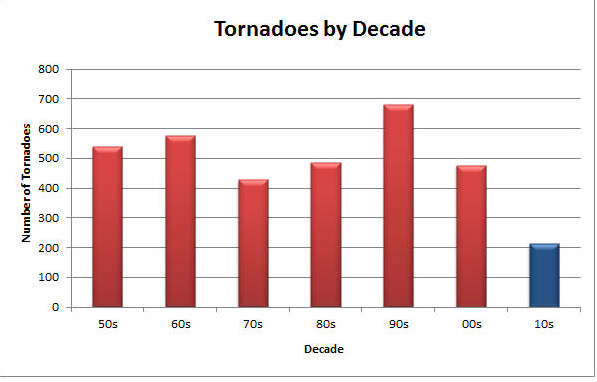 I was reading a blog by Dr. Jeff Masters and read some information there that I would like to share with everyone. It’s early into the storm season, yet there have only been 28 preliminary tornado reports since January 1st to March 9th. The average of 2000-2014 reports are 95 at this time of year. What is more, there has not been any severe thunderstorm reports or watches this year. To drive the point home, this is the latest NOAA has gone without making a single severe thunderstorm watch or warning since the records began back in 1970.The upper-level trough over Hudson Bay keeps pushing storms and unstable air masses off to the east before they can develop. According to the information, it seems when this trough begins to move position into a more favorable one, the real storm season will begin!

Great write-up. I also noticed that the two years since 2005 that had record low tornado reports through March were 2010 and 2014. Both seasons didn’t see much until significant tornado events in late April.

Not sure where you get the “No thundestorm reports or watches this year” comes from. there’s been at least a couple down here in Florida so far this year (see below). I’m sure that there’s more than that. however these have been relatively short lived IIRC. I am assuming that you meant out west/north. But great writeup anyway

Ah, I see the reports you posted. However I made that statement by looking at the preliminary reports and confirmed reports list on the SPC website. You can see the map in the link below. So I don’t know what to think of that. Lol. Just the same though, it’s very quiet right now.

And I’m pretty optimistic about the season blowing up like Reed was referencing about 2011. I really hope we see action!

“Only 4 watches have been issued through late February, 2015. All 4 have been tornado watches.” (Source: http://www.spc.noaa.gov/wcm)

Not to be rude, but just thought I’d point out that you’re talking about severe thunderstorm warnings, not a watch.
Either way, kind of crazy that we’ve only had 4 severe weather warnings of any kind this year with all of them being tornado watches.

As far as severe weather reports go, only 2 occurrences of severe hail were reported with 119 severe wind reports. Might seem like a lot of wind reports, but that’s tiny compared to last year which was a quiet storm year as well. It will be interesting to see how things change as spring comes and temps warm up. I’m hoping Reed’s previous comments about Texas being active come true, as I’m based out of Texas and suffered through a rough season last year coming up with only 1 tornado on 3 chases in other states on high-risk and mod-risk days. Would be nice to be able to stay in state and get some good storm action.

I don’t think we’ll see a ramp up in activity like 2011, but I also don’t think it will be as dismal a season number wise for tornadoes as, for example, 2012. My gut says 1100-1200 tornadoes for the year in 2015… Time will tell. I think late April through early June will be the most active time of year (much like 2014), first Dixie Alley, then the TX/OK panhandles. This is mostly just speculation though.

Very true. Probably similar trend this year. Maybe tornado numbers will be a bit higher than 2014 by the end of the year… We’ll see

Climate issues have little to do with this, as ridge/trough patterns are not more common now. There will be years with predominant west coast trough’s and of course east coast ridges and those years will have more tornadoes. Not a climate induced thing just the pattern we are in and have been in before.

At least there has been less tornadoes to create damage but what a bummer for chasers!!!

hey reed does this mean big tornados in month of may ?